The fourth language in Switzerland doesn't have an easy time of it. People do tend to look on Romansh fondly, but it is being spoken less and less nowadays. The municipality of Samedan is attempting to counteract this: with an officer for bilingualism.

Although only 0.6 per cent of the Swiss population are Rhaeto-Romanics: their language is popular and is increasingly conquering the lowlands. The largest Rhaeto-Romanic community can be found in Zurich and protects Romansh with dedication as an identity-giving cultural asset. But even towns who do not speak a word of Romansh are now calling their children Gian, Curdin and Flurina. Is Romansh in fashion? «That may be true outside of Upper Engadin. You hear it far too rarely here,» says Andrea Urech. The retired secondary school teacher has been the officer for bilingualism in the Upper Engadin municipality of Samedan since 2005 and, as the first and only person in the canton, is officially responsible for looking after and promoting Romansh.

Until 200 years ago Samedan was Romanic

One of his most obvious successes can be seen at the station: the bilingual village map. For example you will see the term Baselgia – Kirche (church). Or Scoula cumünela – Gemeindeschule (community school), Butias – Geschäfte (shops), Tualetta – Toilette (toilet), Föcler – Feuerstelle (BBQ site). Right into the nineteenth century, the people of Samedan spoke almost exclusively Puter, a Rhaeto-Romanic dialect. According to Urech, that figure has now gone down to 17 per cent. «But nevertheless around half of the people of Samedan still regularly speak Puter.» The community school has played a major role in this, he reports, as teaching has been bilingual from nursery through to the very last class since 1996.

Together with a small group of local language enthusiasts, the 'Multiplicatuors da Samedan', Andrea Urech is constantly creating new ideas of how to remind the locals of the cultural value of their language. And that is why he always greets people in Puter, has already designed pins saying «Eau incleg rumauntsch» (I understand Romansh) and «Eau discuor rumauntsch» (I speak Romansh), postcards, table mats bearing texts written by local poets and a shopping bag with expressions in German, Romansh and Italian. His latest invention: an umbrella with sayings in Puter. «So that Romansh is not left out in the rain,» he says with a grin.

Rhaeto-Romanic was widely used from the upper Danube to the Adriatic 1,500 years ago. Today, it is used in the Vorderrhein, parts of the Hinterrhein, Oberhalbstein and the Albula valley as well as Upper and Lower Engadin and Val Müstair. As many valleys in Graubünden used to be remote and there were also a number of different faiths, five different regional dialects came into being: Sursilvan, Sutsilvan, Surmiran, Puter and Vallader. The pan-regional written language Romansh Grischun, in existence since 1982, is a controversial subject among the people in the canton of Graubünden. Even though both the canton and the state write their official documents in this language, teaching material is still published in the five different dialects, something Andrea Urech sees as an essential prerequisite for the preservation of the Romansh language. 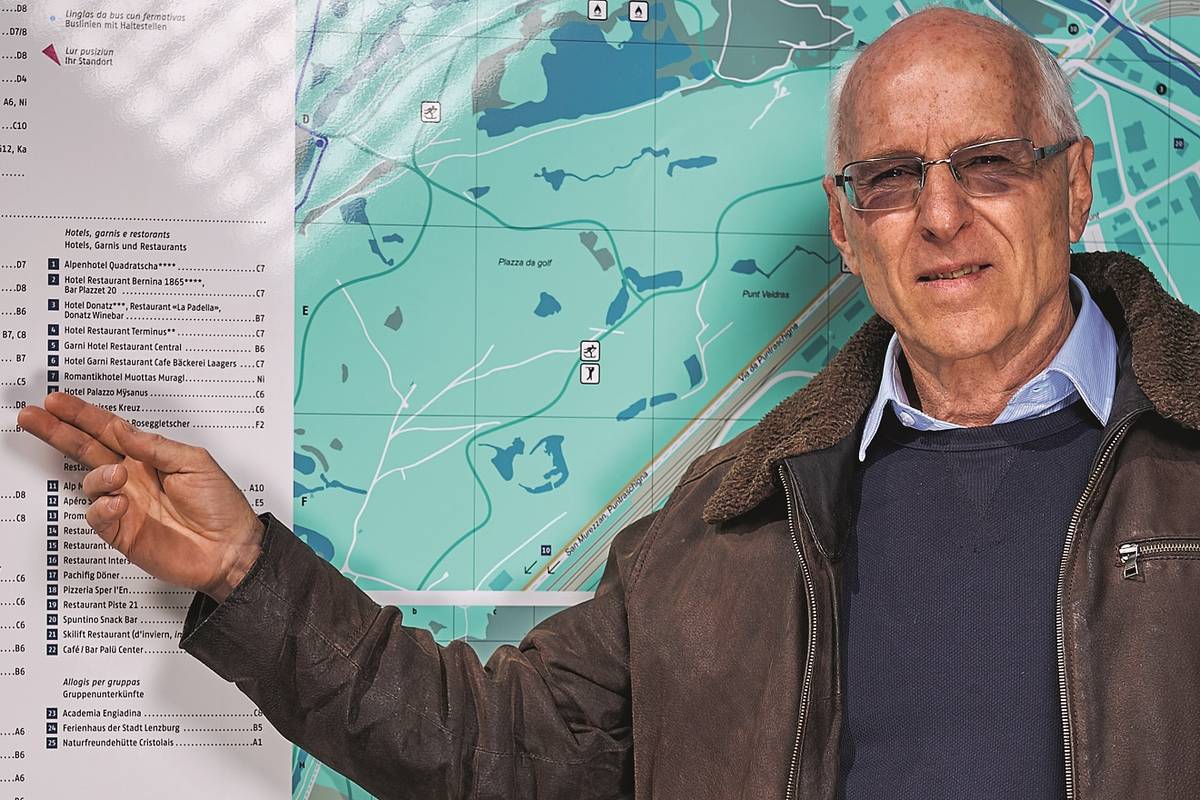 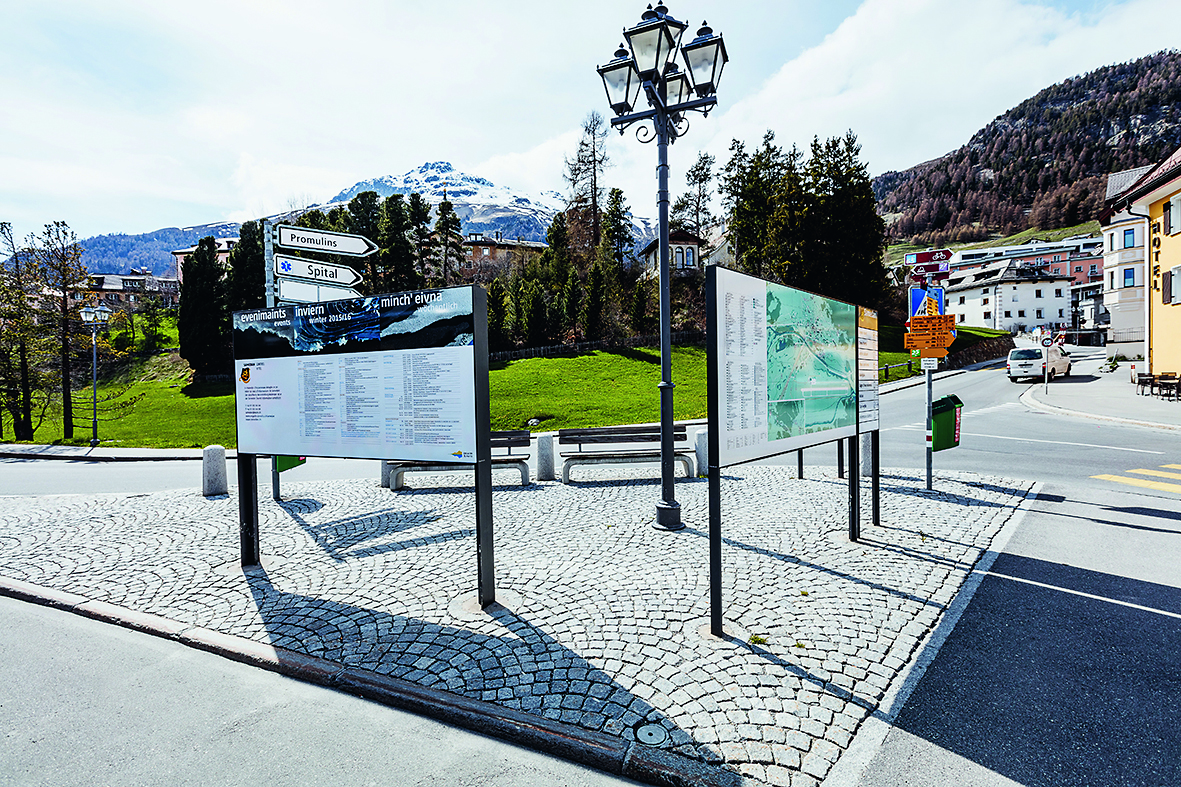 Prominently placed: Travellers can find out where to find Baselgia or Butias in Samedan right at the station. 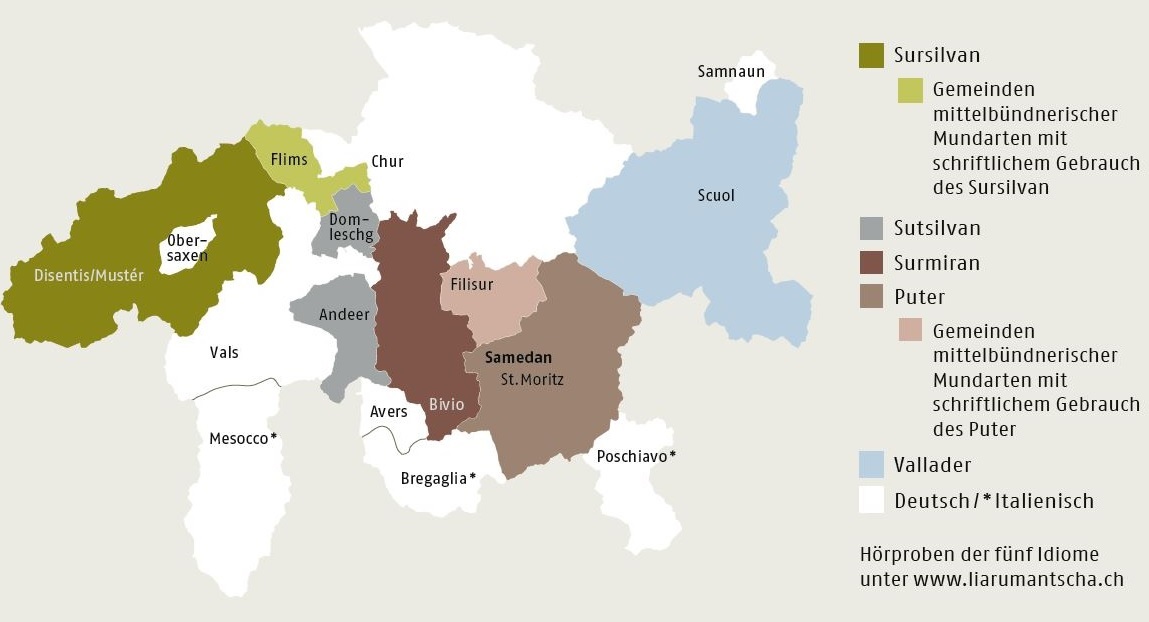 Because of the former remoteness of many of the valleys of the Grisons and confessional differences, there are five different idioms: Sursilvan, Sutsilvan, Surmiran, Puter and Vallader.