The Rhaetian Railway is a pioneer

More than half of the 115 tunnels on the Rhaetian Railway network of track need to be renewed due to their age. With this in mind, the Rhaetian Railway developed a new, standardized method of repair: the "standard tunnel construction". This guarantees regulated building procedures, lower costs than previous methods and enables renewal during ongoing operation.

Most of the Rhaetian Railway's tunnels were built at the beginning of the 20th century. To ensure that these tunnels continue to meet the requirements of a modern rail operation, the Rhaetian Railway will need to refurbish approximately half of all its tunnels over the next couple of decades. Thanks to the newly developed standard construction method, the quality and cost-effectiveness of tunnel renovations will be improved, the safety standard increased, and the service life of the tunnels raised from the current average of 30 to 50 years to 70 to 100 years.
With this new construction method, the walls of the tunnels are completely replaced rather than "merely" restored as before. Therefore, the track is lowered, the tunnel cross-section is enlarged, a new drainage system is constructed, prefabricated concrete elements are used as walls and the portals are newly constructed. The renewal of the tunnels can thus be carried out during ongoing operation. 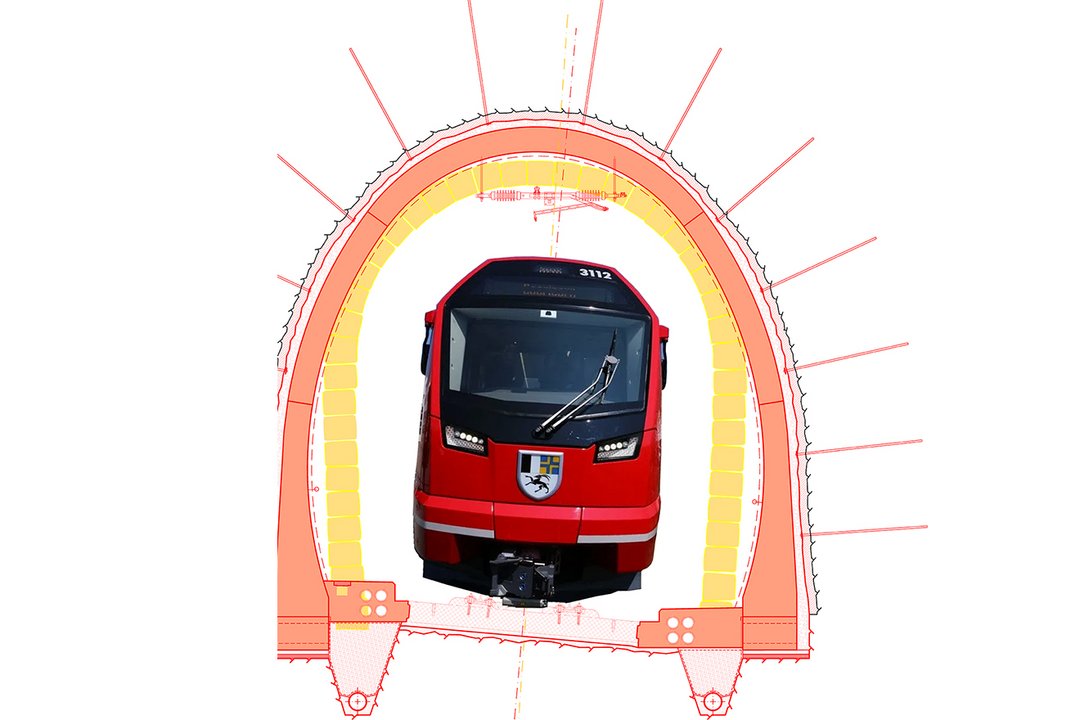 Old and new tunnel cross-section with a ballastless track and a multiple-unit train "Capricorn".

The "standard tunnel construction method" was used for the first time in the renewal of the approximately 108-year-old and 334-meter-long Glatschera Tunnel below Bergün. The track was lowered by 52 cm. This was followed by enlargement of the tunnel cross-section by means of blasting and installation of the prefabricated concrete elements from freight cars. The Rhaetian Railway took a pioneering role with this project and aroused the interest of other railroad companies. The same construction method was subsequently used to renew the Sasslatsch tunnel (Susch - Lavin) and the Mistail tunnel (Solis - Tiefencastel). 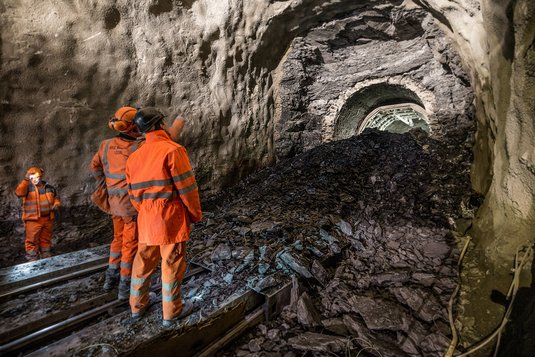 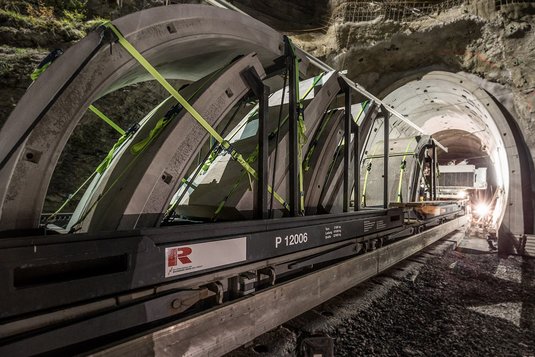 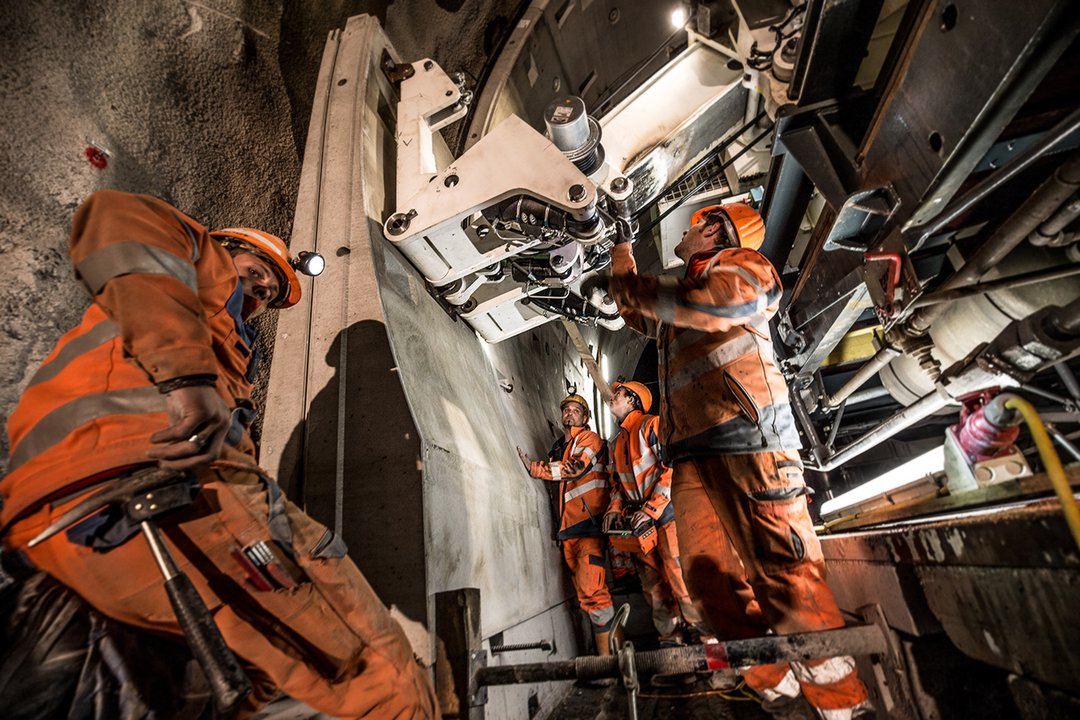 The Bergünerstein Tunnel was the first tunnel to receive a ballastless track: The tracks are no longer mounted on sleepers and laid in ballast; instead, a construction consisting of a concrete slab with pre-assembled support points is used for fixing the tracks.
Together with specialist planners, the Rhaetian Railway has further developed this method for the Touatunnel (Muot - Preda) and the Brailtunnel II (Cinuos-chel-Brail - Carolina) and standardized it in such a way that a total closure of the tunnel is still necessary – but lasting just a few days. In addition to increasing productivity, this also ensures that no slow speed section must be set up when the track passes through the construction site, thus ensuring that timetable stability is not impaired.
For the sections with a gradient of more than 50 0/00, it was necessary to dispense with the installation of prefabricated tubbings in order to ensure an appropriate supply to the construction site. The tunnels in question were provided with an inner lining of shotcrete. This construction method was used for the first time on Val Varuna Tunnel I (Cavaglia - Cadera) on the Bernina. 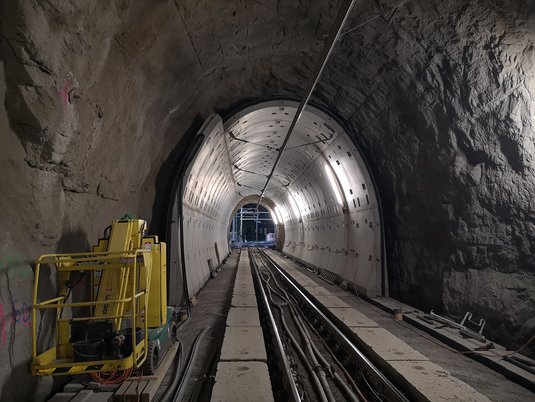 View from the Bergünerstein Tunnel. 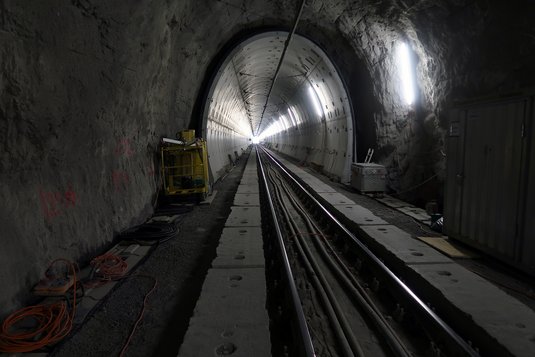 Inside the Bergünerstein Tunnel with the ballastless track.

The Rhaetian Railway will continue to adapt the standard tunnel construction method to current needs. The experience and flexibility now gained will make it possible to work on several projects simultaneously on the Albula, Engadin, Arosa and Bernina lines in the future.