It's what every railway enthusiast dreams of: Journey beside the driver in the cab of an RhB locomotive through the Albula Valley or along the Bernina Line, the highest railway line in the Alps. For the 75th anniversary of the locomotive Ge 4/4 I (BoBo I), exclusive footplate rides can now be booked on the Rhine Gorge Experience train. Not only do you have a front-row seat – there's also a certificate and snapshots to remember the journey by.

Over 100 years ago, the railway pioneers built the Albula and Bernina lines through the impassable mountain terrain of the Swiss canton of Graubünden. Today, these two railway lines are still among the most spectacular experiences available on rails – not least thanks to the many attractions: the Solis and Landwasser Viaducts, helical tunnels between Bergün and Preda, Ospizio Bernina, Alp Grüm and the Brusio Circular Viaduct.

A lasting memory: At the end of the day, the RhB will present you with a commemorative certificate and photo.

The journey on the footplate is in itself the highlight of the day. And there are further highlights to follow such as the souvenir certificate.

You will travel through the untamed Rhine Gorge, along the turquoise-green waters of the Rhine, past rock walls known as 'ruinas' up to 350 metres high. 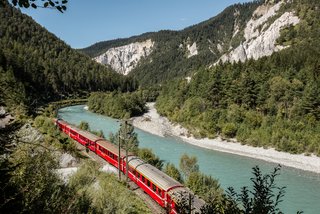 Even today, the 62-kilometre Albula Line is still considered a masterpiece in terms of railway engineering and routing. The RhB opened the spectacular section of track between Thusis and St. Moritz in 1903, after just five years' construction. The red train climbs over 1,000 metres in altitude – thanks to the Solis Viaduct, Landwasser Viaduct and the helical tunnels between Bergün and Preda – without rack-and-pinion technology.
More information 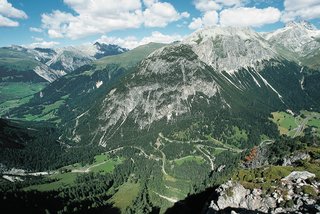 The Bernina Line between St. Moritz and Tirano links northern and southern Europe in a most impressive fashion. For over 100 years now it has been running past mountains, lakes and glaciers down to the palms of Valtellina. The famous panoramic route is a true landmark which has UNESCO World Heritage status.
Further information 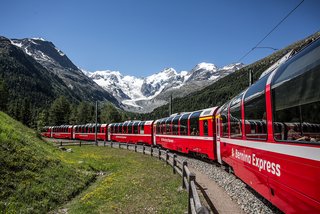 Making your day in the driver's cab a guaranteed success: an experienced engine driver will accompany you during this exclusive railway experience. You will hear stories and anecdotes about the Rhaetian Railway, learn about the Albula/Bernina landscape and its engineering structures.

To ensure the footplate ride remains long in the memory, at the end of the day, the Rhaetian Railway will present you with a commemorative certificate and photo.

Please contact the station Ilanz at least 7 days before the desired date.

Be part of the RhB Community!