It has been officially confirmed and accomplished: on Saturday afternoon, Rhaetian Railway (RhB) took the longest narrow gauge passenger train with 1.906,375 meters achived on 29. October 2022 on the UNESCO World Heritage route from the Albula Tunnel in Preda to the world-famous Landwasser Viaduct just outside Filisur. Several thousand guests and railway fans attended the public event in Bergün or positioned themselves along the route mentioned above to experience this unique journey.

RhB travelled along the Albula Line on Saturday afternoon, 29 October 2022, with 25 fourpart Capricorn railcars from leading Swiss manufacturer Stadler. The 1.906,375-metre-long record train was lined up like a string of pearls in the Albula Tunnel during the night from Friday to Saturday and on Saturday morning. It then set off in Preda at about 2.20 pm. Shortly after 3.30 pm, the record-breaking train reached its destination: the spectacular crossing of the Landwasser Viaduct. “After intensive preparation, we are overjoyed to have achieved this world record. Not only did we have a wonderful railway festival here in Bergün, but we were able to present ourselves around the world as a fascinating and innovative mountain railway thanks to our dedicated partners, sponsors and an incredibly dedicated team,” says Renato Fasciati, Director of RhB shortly after the world record was set. The success of the world record was officially confirmed on site by GUINNESS WORLD RECORDS™ 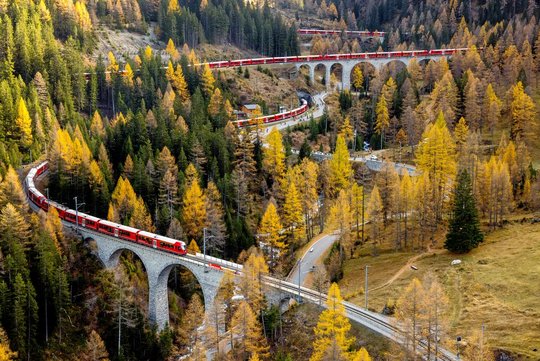 Never before has such a long passenger train travelled anywhere in the world, let alone in the high mountains on a narrow-gauge railway with tight curve radii, lots of tunnels and viaducts. This gives rise to various challenges that must be overcome before and during the journey.

Synchronous control of train structure and handling braking forces
The 25 trains must all accelerate or decelerate at the same time, although only four trains can be controlled from the same driver’s cab. An electric circuit ensures that all trains brake at the same time if the trains need to slow down suddenly. Due to the large weight of the train (2,850 tonnes without passengers), very high forces will be exerted on the infrastructure and the carriages if parts of the train do not react in sync. A separate intercom system on the train, trained train drivers and clear commands ensure the corresponding result. In addition, special software is loaded for driving the record-breaking train and the mechanical braking power is reduced.

Recuperation and effects on grid load
On the descent, the train is fully braked by electric recuperation. This produces electricity that is fed to the overhead line and can be used by other trains on the RhB network (as well as other railways in Switzerland and abroad). In addition, the excess electricity can also be fed into the public grid via power converters (e.g. in Bever). The major challenge is that the overhead contact line voltage could increase too much (usually 11,000 volts), as 25 trains in the same section will be generating electricity synchronously. The overvoltage might not be able to be absorbed by individual systems connected to the traction current. Various tests were carried out to this end and measures are being taken to ensure the record-breaking journey can take place (e.g. limiting speed and acceleration, reducing recuperation with special train software, preventative transfer of systems to local grid power supply).

Connection of trains
The individual four-part Capricorns are connected to a fully automatic coupling. Four trains are driven by each train driver. There is mechanical and pneumatic coupling between four Capricorn trains, but not electric coupling. For this purpose, additional safety control lines are laid between the trains.

Ensuring safety and availability of track and systems
The track is closed to other trains for the record run. The record train is sometimes longer than various block sections. The journey is controlled from the operations centre in Landquart. It must be ensured that the signals, as well as the level crossings and customer information, are triggered at the right moment.

Live media production
The record run will be recorded (by Blick) via a live production and broadcast on various channels. For this purpose, a wide range of cameras from drones, in the driver’s cab and on the track will be used and will have to be processed in real time. This alone is a major (and exciting) challenge on a track with limited mobile coverage.

A total of 15 well-known partners are on board for the world record attempt. They underpin the pioneering and innovative spirit that has always distinguished Switzerland as a railway and travel destination. Without the financial and technological support of the partners, the world record attempt would not be feasible. Stadler, which is also the manufacturer of the Capricorn railcars, will act as presenting partner.

The other engineering services are provided by ABB and Sersa as companies of the Rhomberg Sersa Rail Group. ABB stands for energy efficiency and Sersa for the construction and maintenance of the railway infrastructure. The main partners are complemented by Märklin, a specialist for model railways.

A cruise on rails