The test begins: as part of the 175th anniversary celebrations of Swiss railways, Rhaetian Railway (RhB) is making an official attempt to operate the longest passenger train in the world on Saturday, 29 October 2022. The 1,910-metre-long train with 100 coaches will travel along the Albula/Bernina UNESCO World Heritage route from Preda to Bergün and on over the Landwasser Viaduct. The corresponding tests for technical feasibility and safety assurance have taken place over the past few months.

The longest passenger train in the world is to be composed of 25 separable multiple-unit trains of the latest type: “Capricorn”. These will be acquired by RhB by 2024 as part of the largest procurement of rolling stock in its history and will give the Graubünden railway a major push towards modernisation. The record attempt – assuming it is successful – is to be entered in the Guinness Book of Records.

Making the legacy of the railway pioneers visible
The world record attempt is to take place on the world-famous Albula/Bernina UNESCO World Heritage route (the RhB has borne this coveted label since 2008). The longest passenger train will wind its way from Preda through the fascinating helical tunnels to Bergün and on over the Landwasser Viaduct. And thus make the railway engineering masterpiece of the railway pioneers visible. RhB Director Renato Fasciati: “Switzerland is a railway country like no other. This year, we are celebrating 175 years of Swiss railways. With this world record attempt, RhB and its partners want to play their part in achieving a pioneering feat that has never been seen before.” On board are leading expert partners from the fields of technology, industry, services, tourism and media. 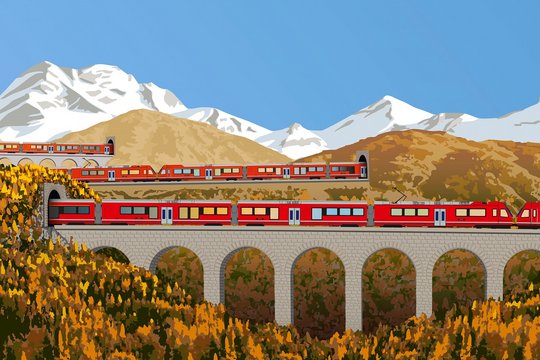 Please note that travel to Bergün is not included in the ticket. A regular ticket is also required for the journey. Further information is available under the heading Arrival.

There is a special timetable for the world record attempt.

Please note that when purchasing a festival ticket, you must choose the desired train connection. This is absolutely necessary so that all guests can arrive at the festival site in good time. Guests from the Engadine can purchase seats for the train replacement bus from. St. Moritz via the Julier Pass.

The Albula Tunnel will be closed all day. Passengers from the Engadin will be diverted via Vereina – Davos – Filisur.

Please note that there are no parking spaces in Bergün. Arrival by car is not possible.

Return journey:
From 4.00 p.m. trains run regularly in the direction of Chur and Engadin. Please pay attention to the announcements in Bergün. Due to the expected high number of visitors, waiting times are to be expected.

Please note that the extra trains may only be used with a valid reservation.

The remaining trains run according to the official timetable and departure times:

Please note that the trains end in Preda, Bergün or Tiefencastel.

Please note that the extra bus may only be used with a valid reservation.

Never before has such a long passenger train travelled anywhere in the world, let alone in the high mountains on a narrow-gauge railway with tight curve radii, lots of tunnels and viaducts. This gives rise to various challenges that must be overcome before and during the journey.

Synchronous control of train structure and handling braking forces
The 25 trains must all accelerate or decelerate at the same time, although only four trains can be controlled from the same driver’s cab. An electric circuit ensures that all trains brake at the same time if the trains need to slow down suddenly. Due to the large weight of the train (2,850 tonnes without passengers), very high forces will be exerted on the infrastructure and the carriages if parts of the train do not react in sync. A separate intercom system on the train, trained train drivers and clear commands ensure the corresponding result. In addition, special software is loaded for driving the record-breaking train and the mechanical braking power is reduced.

Recuperation and effects on grid load
On the descent, the train is fully braked by electric recuperation. This produces electricity that is fed to the overhead line and can be used by other trains on the RhB network (as well as other railways in Switzerland and abroad). In addition, the excess electricity can also be fed into the public grid via power converters (e.g. in Bever). The major challenge is that the overhead contact line voltage could increase too much (usually 11,000 volts), as 25 trains in the same section will be generating electricity synchronously. The overvoltage might not be able to be absorbed by individual systems connected to the traction current. Various tests were carried out to this end and measures are being taken to ensure the record-breaking journey can take place (e.g. limiting speed and acceleration, reducing recuperation with special train software, preventative transfer of systems to local grid power supply).

Connection of trains
The individual four-part Capricorns are connected to a fully automatic coupling. Four trains are driven by each train driver. There is mechanical and pneumatic coupling between four Capricorn trains, but not electric coupling. For this purpose, additional safety control lines are laid between the trains.

Ensuring safety and availability of track and systems
The track is closed to other trains for the record run. The record train is sometimes longer than various block sections. The journey is controlled from the operations centre in Landquart. It must be ensured that the signals, as well as the level crossings and customer information, are triggered at the right moment.

Live media production
The record run will be recorded (by Blick) via a live production and broadcast on various channels. For this purpose, a wide range of cameras from drones, in the driver’s cab and on the track will be used and will have to be processed in real time. This alone is a major (and exciting) challenge on a track with limited mobile coverage.

A total of 15 well-known partners are on board for the world record attempt. They underpin the pioneering and innovative spirit that has always distinguished Switzerland as a railway and travel destination. Without the financial and technological support of the partners, the world record attempt would not be feasible. Stadler, which is also the manufacturer of the Capricorn railcars, will act as presenting partner.

The other engineering services are provided by ABB and Sersa as companies of the Rhomberg Sersa Rail Group. ABB stands for energy efficiency and Sersa for the construction and maintenance of the railway infrastructure. The main partners are complemented by Märklin, a specialist for model railways.

Tickets are sold out

The available tickets are already sold out. Couldn't get hold of a ticket? The world record attempt will be broadcast live by media partner Blick TV. So you still have the opportunity to be there. We will link the livestream here.

A cruise on rails