It has been officially confirmed and accomplished: this Saturday afternoon, Rhaetian Railway (RhB) took the longest narrow gauge passenger train in the world on the UNESCO World Heritage route from the Albula Tunnel in Preda to the world-famous Landwasser Viaduct just outside Filisur. Several thousand guests and railway fans attended the public event in Bergün or positioned themselves along the route mentioned above to experience this unique journey. Trains will be operating normally again from Sunday, 30 October 2022.

RhB travelled along the Albula Line on Saturday afternoon, 29 October 2022, with 25 fourpart Capricorn railcars from leading Swiss manufacturer Stadler. The 1,906-metre-long record train was lined up like a string of pearls in the Albula Tunnel during the night from Friday to Saturday and on Saturday morning. It then set off in Preda at 2.20 pm. Shortly after 3.30 pm, the record-breaking train reached its destination: the spectacular crossing of the Landwasser Viaduct. “After intensive preparation, we are overjoyed to have achieved this world record. Not only did we have a wonderful railway festival here in Bergün, but we were able to present ourselves around the world as a fascinating and innovative mountain railway thanks to our dedicated partners, sponsors and an incredibly dedicated team,” says Renato Fasciati, Director of RhB shortly after the world record was set. The success of the world record was officially confirmed on site by GUINNESS WORLD RECORDS™. 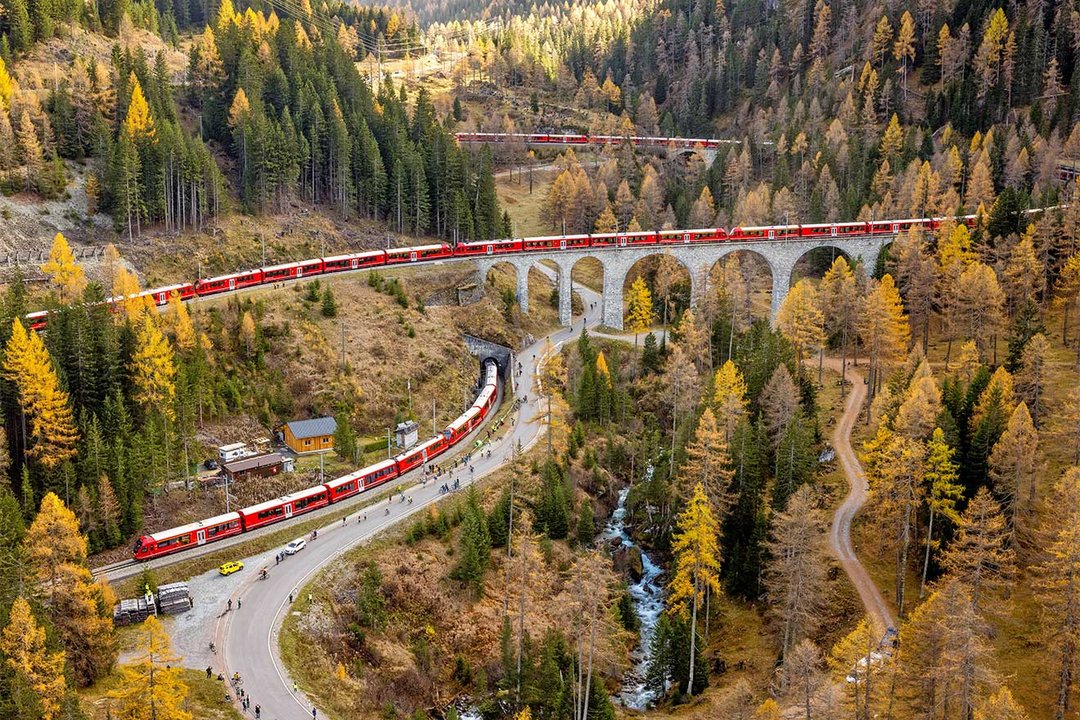 The RhB partners showed their skills at the station itself. For example, the track construction company SERSA was present with a track construction machine and a locomotive simulator. Expertise partners ABB and Repower provided information about electromobility. Siemens enabled a fantastic rail experience with augmented reality. The Albula Railway Museum was open, while Märklin and BEMO also showed various model railways. The entire railway village of Bergün was on the move.

Special timetable
A special timetable was in place on the RhB Albula Line on 29 October 2022. At the same time, the Albula Pass road between Filisur and La Punt was closed to road traffic from 6 am to 10 pm. Trains will be operating normally again from Sunday, 30 October 2022.

Facts and figures about the world record attempt