The beginning of the bond between the Rhaetian Railway and the Hakone Tozan Railway (HTR) goes way back - nearly 100 years back! The Bernina Line overcomes a difference in altitude of 1824 meters purely thanks to classical physics known as adhesion. The special conditions of the Bernina Line’s track encouraged a Japanese engineer named Handa to visit Switzerland in 1912. On behalf of the Hakone Tozan Railway, he was looking for models for the track of a railroad in the topographically difficult area of Hakone - a popular tourist region in the south of Tokyo. Here in Grisons, he found what he was looking for. The adhesion railroad system on the Bernina Line convinced him right away. Thus, the Hakone Line was built according to the same principle of the Bernina Line as the Rhaetian Railway.

The partnership between the Bernina Line of the Rhaetian Railway and the Hakone Tozan Railway has existed since 1979, with the aim of promoting tourist traffic in Japan and Switzerland. The partnership is maintained and developed in Japan by Switzerland Tourism on behalf of the Rhaetian Railway. In addition to the exchange of railroad experience, the relationship is not only nurtured by mutual visits, but actively lived. As early as 1982, the Rhaetian Railway brought two cowbells to Japan for the inauguration of the Gora station, which subsequently served as departure signals. In 1984, as an outward sign of the bond, the station names of St. Moritz, Alp Grüm and Tirano on the Bernina Line were written in Japanese script. Since 1991, a Rhaetian Railway traction unit has also carried the designation "Hakone" - with the Japanese national symbol: the rising sun. The Japanese reference can also be seen on a Rhaetian Railway articulated train “Alvra”: Since September 10, 2016, one of the articulated trains has a special Japan compartment. In return, an entire composition of the Hakone Tozan Railway has been in a design completely corresponding to the Glacier Express running in Japan since 2009. In addition, three cars in the design of the Bernina Express are used on other lines in Japan. 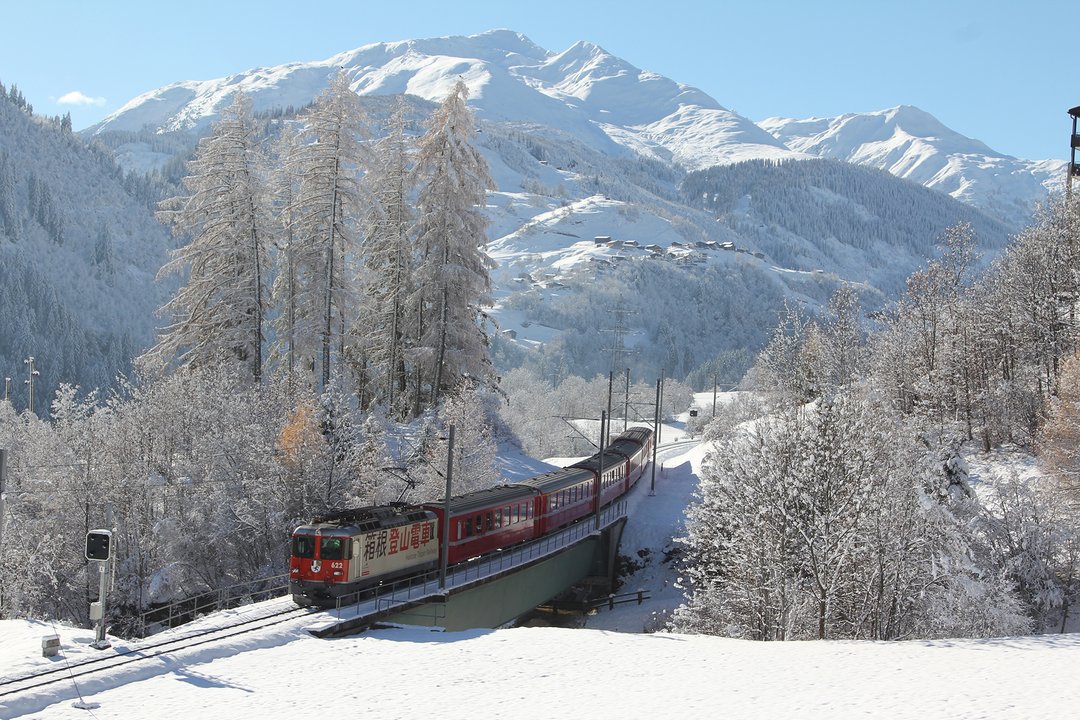 Railcar Ge 4/4 II 622 of the Rhaetian Railway with a Japanese inscription.