The RhB administrative building: an eye-catcher in Chur

Owing to a Christmas light projection, the RhB administrative building is currently shining in great splendour. But even throughout the year, the impressive building is an eye-catcher.

This magnificent building is the work of architect Nicolaus Hartmann, who was responsible for its construction between 1907 and 1910.

Upon seeing the administrative building of Rhaetian Railway for the first time, I was rather impressed and then somehow proud that I could call this building my workplace. Meanwhile, I’ve been going in and out of the building every day for just over three months. Yet I still don’t really know much more about the building than I did when I first laid eyes on it. To remedy the situation, I decided to dedicate some time to studying Luzi Dosch’s text on “The RhB administrative building”. Due to the technical nature of the text, however, I initially found it heavy going but ultimately managed to plough my way through it. To spare you having to do the same, I will now try my best to outline some interesting facts about various details of the administrative building in layman terms. 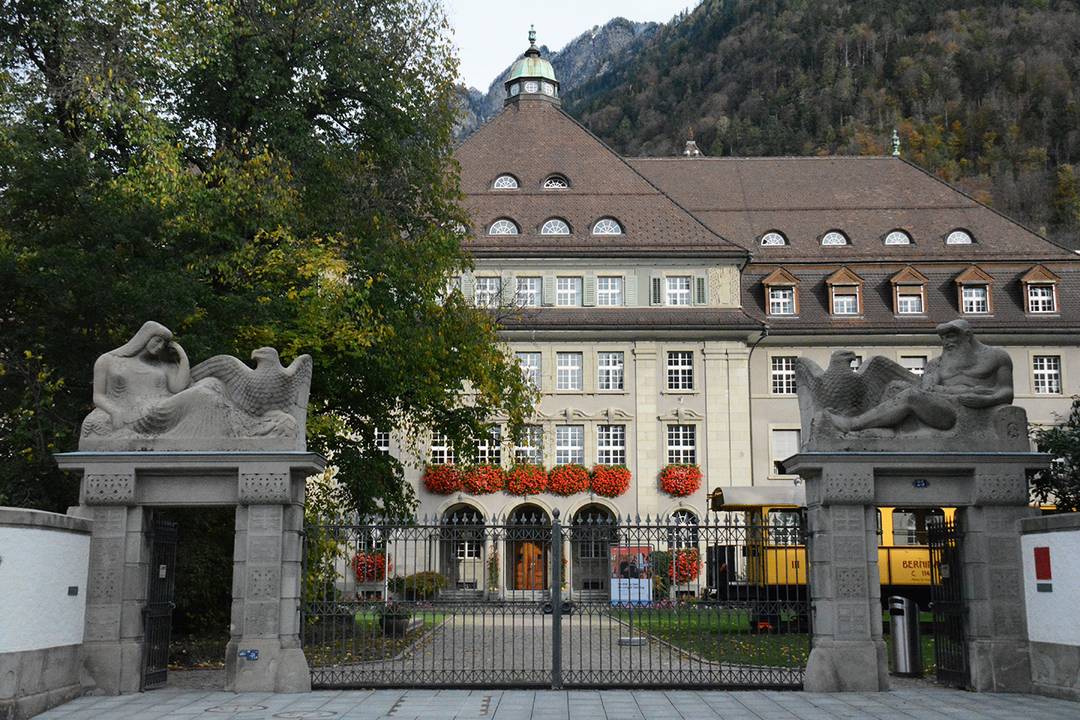 Waiting to greet us on the top of each gate pillar is a figure lying next to an eagle about to take flight. The man’s backside is covered by a skin with a bear head on the back. His muscles and mighty beard make him look powerful. His left arm is resting on a stone emblazoned with the crest of the City of Chur and Switzerland. The woman is wrapped in a see-through petticoat, her head resting thoughtfully in her left hand, her long hair cascading down her back. Like me, I’m sure you’re wondering who these sandstone figures are? They are Rhätia and Rhätier – archetypes of the Swiss canton of Graubünden created by sculptor Otto Weber. 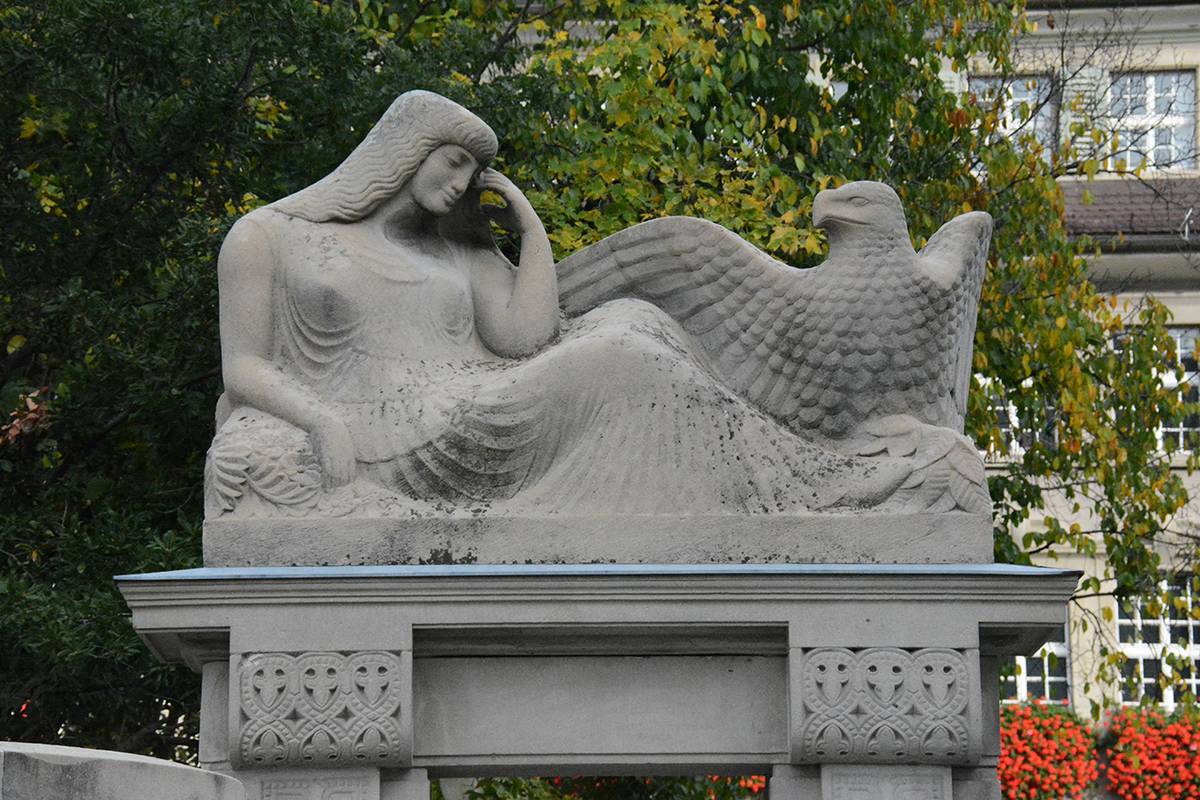 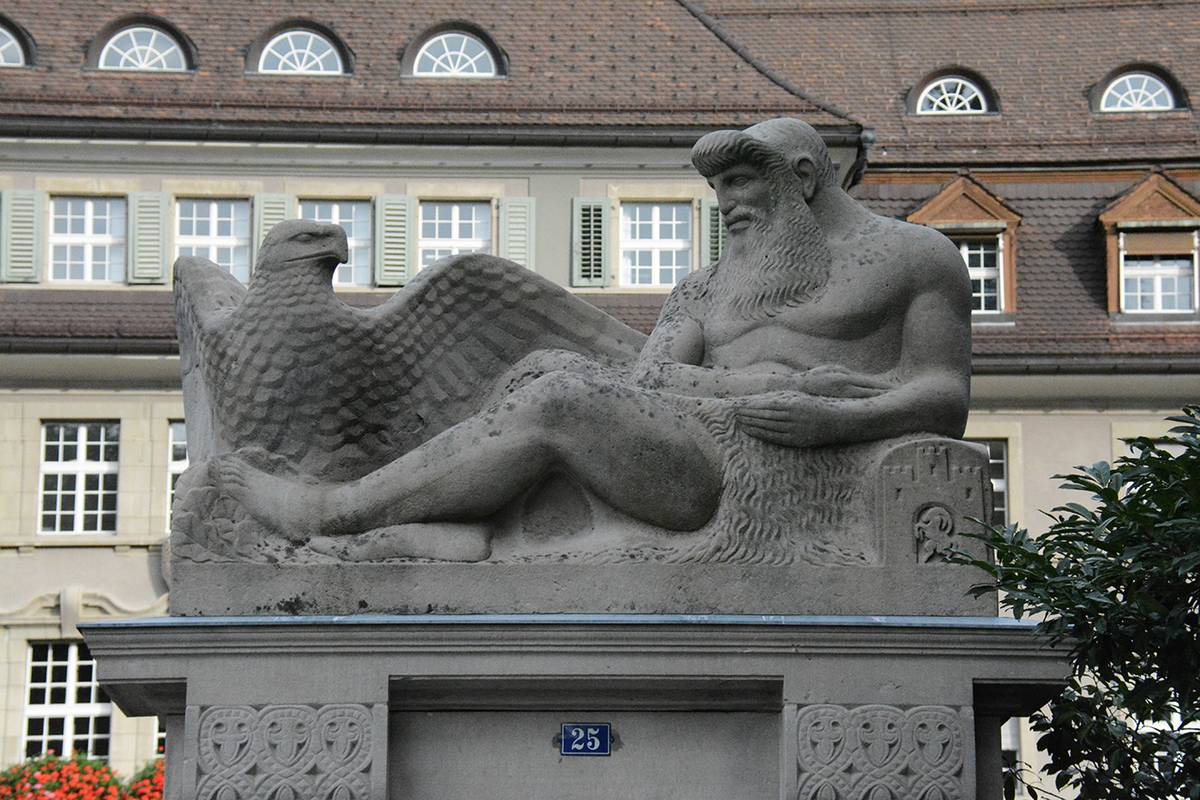 Once through the portal, we have a clear view of the symmetrically designed administrative building. It appears Nicolaus Hartmann devoted much of his time to the midsection when designing the building. This is framed by cornerstones reminiscent of good old Chur buildings, such as the administrative building. A relief has been incorporated into the facade above these cornerstones. Depending on the direction of the sun, you can more or less clearly see a lady in an ancient robe. If it weren’t for Luzi Dosch, I would never have realised that one lady is holding a winged wheel, the other a steam locomotive. Vines are growing up the side of the figures. 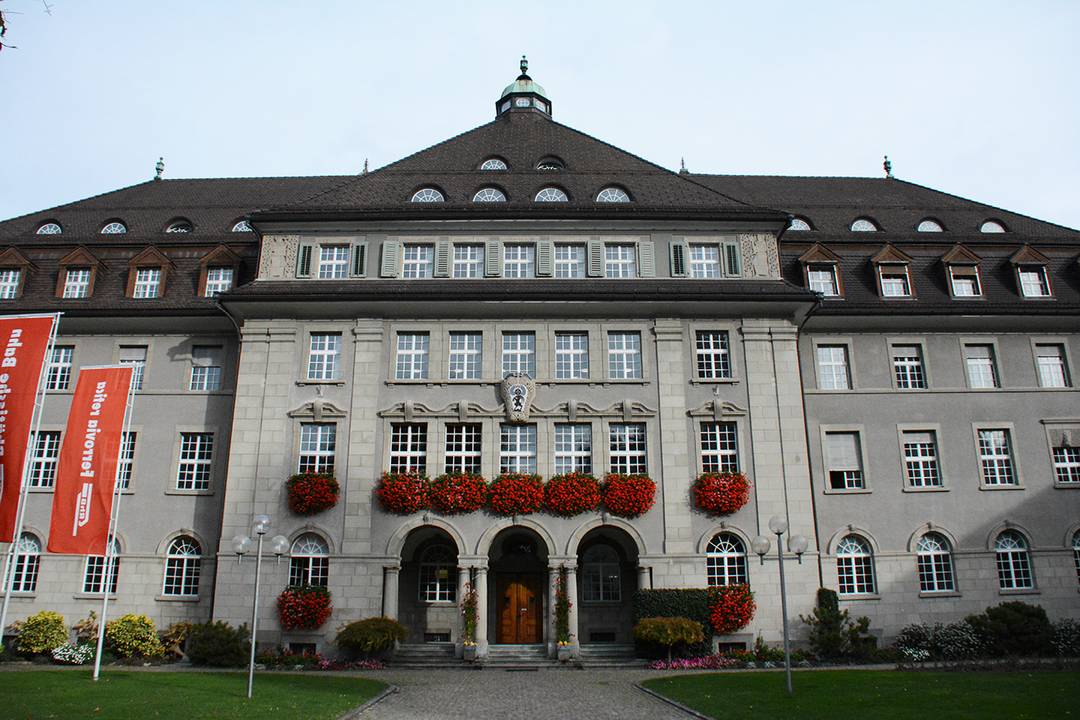 Focus on the midsection of the administrative building.

Still focusing on the same section of the building, the embellishments, so-called window friezes, and a stone crest with the Rhaetian Railway insignia on the first-floor facade immediately catch the eye. Behind this lies the administrative boardroom, the building’s main/reception hall. The office of Director Renato Fasciati can also be seen from outside. He sits in the right wing of the building behind the windows with the slightly embellished chamfers. The midsection of the building features an open porch behind three arches, outwardly supported by grouped pillars. 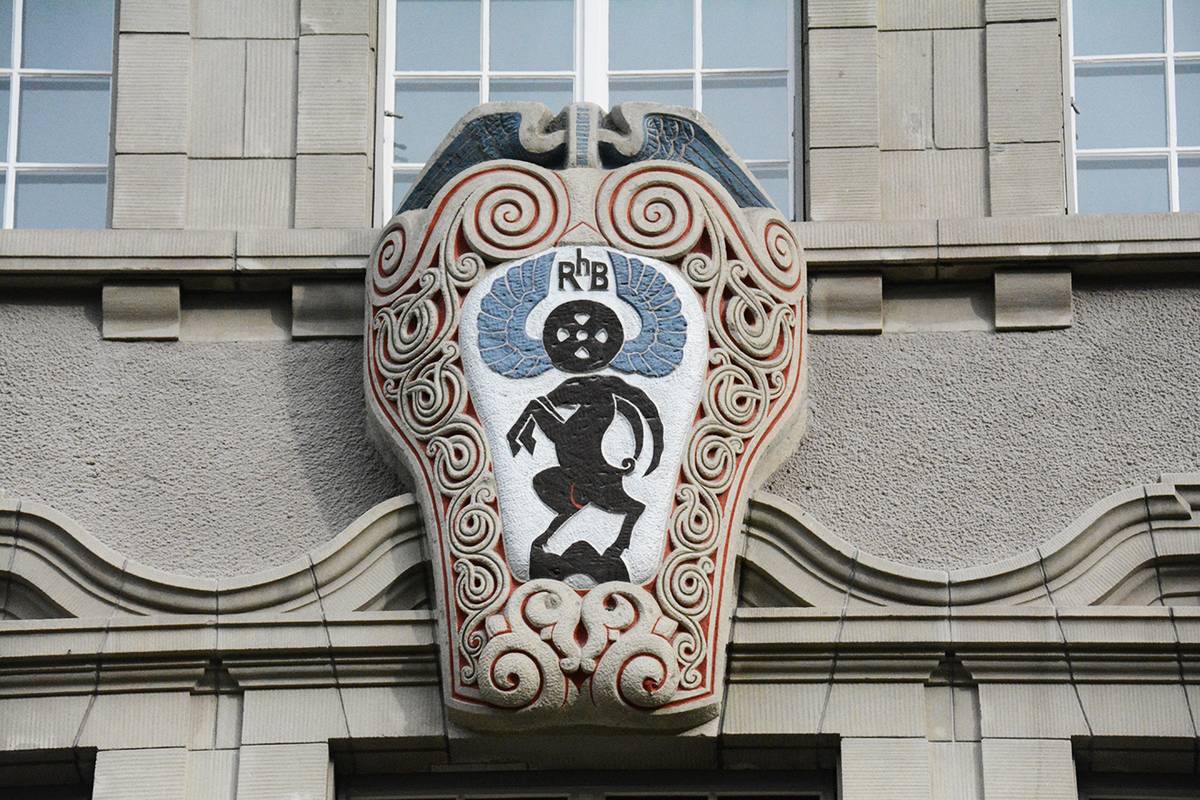 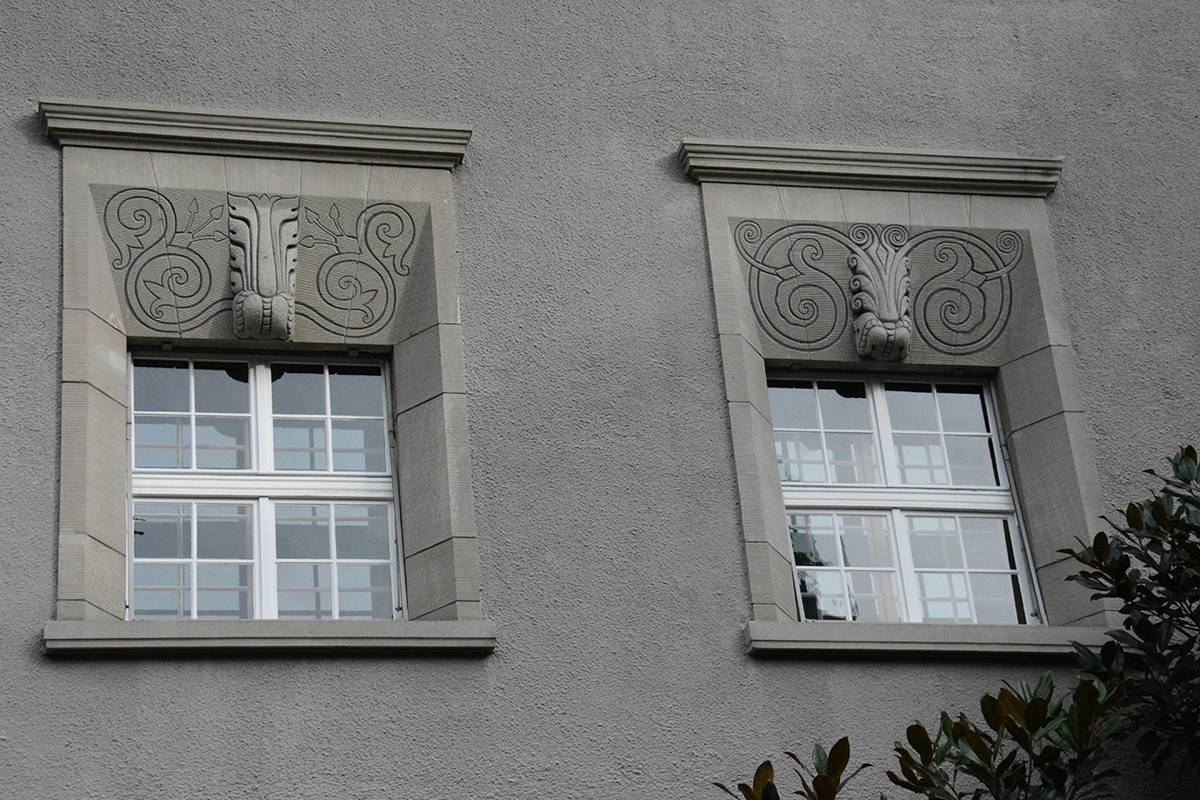 Due to the expansion of the company, the directorate acquired the 3,400 m2 plot of land for 100,000 Swiss francs almost 113 years ago to this day on 23 December 1906. Six architects were invited to draft fitting designs. Four ultimately submitted their concepts. The administrative board sanctioned 430,000 francs for the designs and an additional 46,000 francs for the portal, the administrative boardroom and the director’s office, both of which were furnished with artificial Swiss stone pine panelling. Despite a shortage of workers and partial strikes by the masons, the building was completed within three years. The first ordinary general meeting was held in the new administrative building on 29 June 1910.

Now you can enjoy the light projections on our magnificent administrative building over a glass of mulled wine or punch in our cosy historic bistro railcar «Bucunada».

Historical attractions along the Bernina Line