My sons (12 and 10 years) were not overjoyed when they heard my plan. I wanted to be in Bergün at just after 10 am on a treasure hunt with Clà Ferrovia. Which meant getting up at 6 am – in the middle of the summer holidays. Good idea?

I switched on the light and shouted “Goooooood Mooooorrrrrning”. You can probably imagine how the children reacted. But one hour later, we were on the train to Chur.

My pale-faced sons nibbled away at some chocolate while I talked about the upcoming treasure hunt. I told them about Clà Ferrovia. He’s the children’s conductor used by RhB to advertise its special offers for children. He tells stories about the railway and his adventurous life, does crafts and sings songs with his young passengers. The figure was created by well-known songwriter Linard Bardill.

This summer saw the launch of the Clà Ferrovia treasure hunt. Before embarking on the treasure hunt, users need to launch the corresponding web app and register. Then you see the overview page with lots of beautiful destinations: the Arosa bear sanctuary, the Cavaglia Glacier Mills, Lago Bianco, the Gnome forest near the Wiesen Viaduct, the alpine cheese dairy in Morteratsch... Our destination that morning, however, was the Albula Railway Museum in Bergün. By the time we approached the world-famous Landwasser Viaduct on our way there, the colour was back in the children’s faces.

They noticed on the train that something special was about to happen because people started pulling out their mobile phones and opening the windows. So it was no surprise that they, too, wanted to push their noses to the window and catch a glimpse of the 142 metre long and 65 metre high bridge that arches from one side of the valley to the other. Later, we would also travel to the foot of the Landwasser Viaduct, but first we would head to Bergün.

Looking for the Crocodile

Once there, we were faced with the first task of the treasure hunt. We needed to find the Crocodile locomotive. This travelled the Albula Line from around 1920 to 1970. We quickly found out that it now stands in front of the Railway Museum.

To start the task, we had to photograph a QR code with our mobile phone. That opened up a question in the app that would help us get extra points. Anyone with 300, 600, 900, 1,200 or 1,500 Clà points gets an instant prize. 1,500 Clà points means you are also entered in the draw for three main prizes. We solved the first task in no time, the second one was waiting for us in the Railway Museum: we had to find Clà Ferrovia’s whistle. A “Pixi” book, which you get at the cash desk, helped us in our search. It lists ten places in the Railway Museum where there are tasks to be solved. 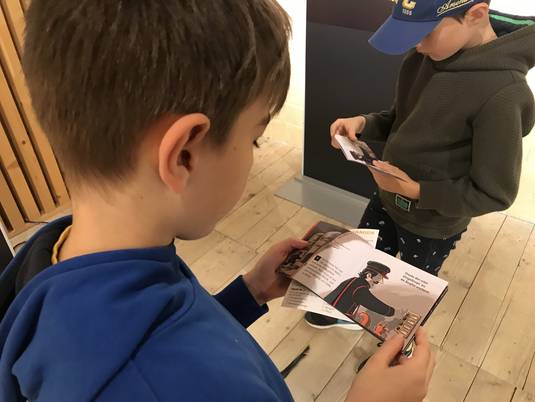 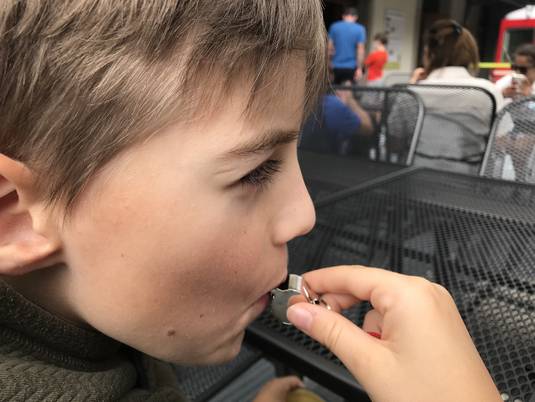 The tasks in the Railway Museum managed to achieve what I hadn’t been able to at home at 6 am that morning. They made my sons’ eyes sparkle. That was because they had to ensure, for example, that the trains did not collide with each other at a signal box or act as train drivers in a simulator. That's when children’s dreams come true. And with the instructions in the “Pixi” book, we finally found the whistle. And the children were given exactly this kind of whistle as a reward – being warned not to use it in the museum. Unfortunately nobody said anything about outside. Thanks a lot, RhB! I now have permanent earache.

For the third task of the treasure hunt, we had to get on the train and go back to Filisur where a choochoo train, also known as the Landwasser Express, was waiting to take us to the foot of the Landwasser Viaduct as I mentioned earlier. The journey takes around half an hour and ends at a secluded spot down by the river with a kiosk and a particularly good view of the Viaduct, which has been a UNESCO World Heritage site since 2008. Of course, the children only had one thing in mind: they wanted to find the QR code so they could collect points. So they weren't nearly as interested in getting a drink at the kiosk as getting me to move: “Come on, Daddy!”