Over the summer months of 2019, Lavin station in Lower Engadin was modernised to cater to people with mobility difficulties. But beforehand nobody knew they were going to make a major discovery in the process.

Over the summer months of 2019, Lavin station in Lower Engadin was modernised to cater to people with mobility difficulties. Most of the work took place over the seven months where the station was completely closed. It was an ambitious building project with a tight time frame. So everyone gave their all to ensure the goals set were achieved. A large staff and machine outfit as well as teams working in several shifts made sure that the ambitious goals could successfully be reached. But nobody had imagined beforehand the major discovery they would make in the process...

While the teams were busy installing the new drainage for the station site, part of the cemetery wall at San Güerg church gave way. An employee from the Archaeological Service of the Swiss canton of Graubünden came to precisely examine and document the individual spots. 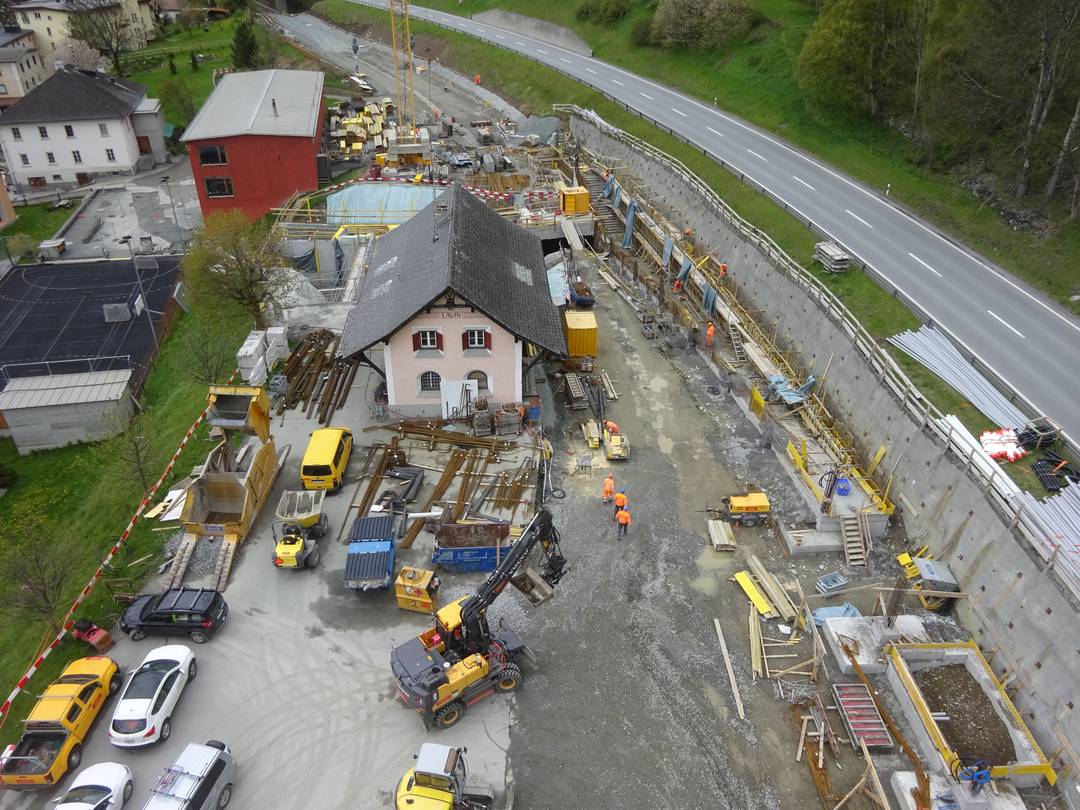 Work on Lavin station under way

Directly under the turf beside the old cemetery wall, they then discovered bones and two graves. In one of the two graves, a skull, shoulder and ribs on the left hand side of the skeleton were laid bare. Unfortunately, the hip and leg area were no longer visible vertically. The skeleton was largely intact. An old stone tomb slab on the wall was a clear indication of the grave. Based on the recognisable parts of the skeleton, it was deemed the grave was laid out west/east. The head was in the west, the individual was thus liturgically facing east. In the second grave, the individual also had its head in the west thus also liturgically facing east. Various structures were found in the deeper areas of the pit which had been dug for the railway drainage. For example, pieces of charcoal which indicated there might have been a fireplace and also anthropogenically shaped graves which were clearly marked by surrounding sedimentary rock in different colours.

The process of radiocarbon dating was used to determine the age of the structures detected in the deep areas (wood charcoal fragment and soil sample). Both samples date back to the first quarter of the second century BC which means that these structures are thus both from the Early Bronze Age.

Grave-find just a few centimetres under the surface

Once the archaeological examinations were completed, the cemetery wall was rebuilt in consultation with the Archaeological Service and the Office for the Preservation of Historical Monuments of the Swiss canton of Graubünden. The Rhaetian Railway trains are once again running on schedule to and from Scuol-Tarasp. Now only the old San Güerg church and the cemetery wall which has been rebuilt in the old style give us any indication of what happened 4,000 years ago in Lavin.

The last journey of locomotive 628

A locomotive's story and why it is now time to say goodbye.